Royal Caribbean’s Symphony of the Seas 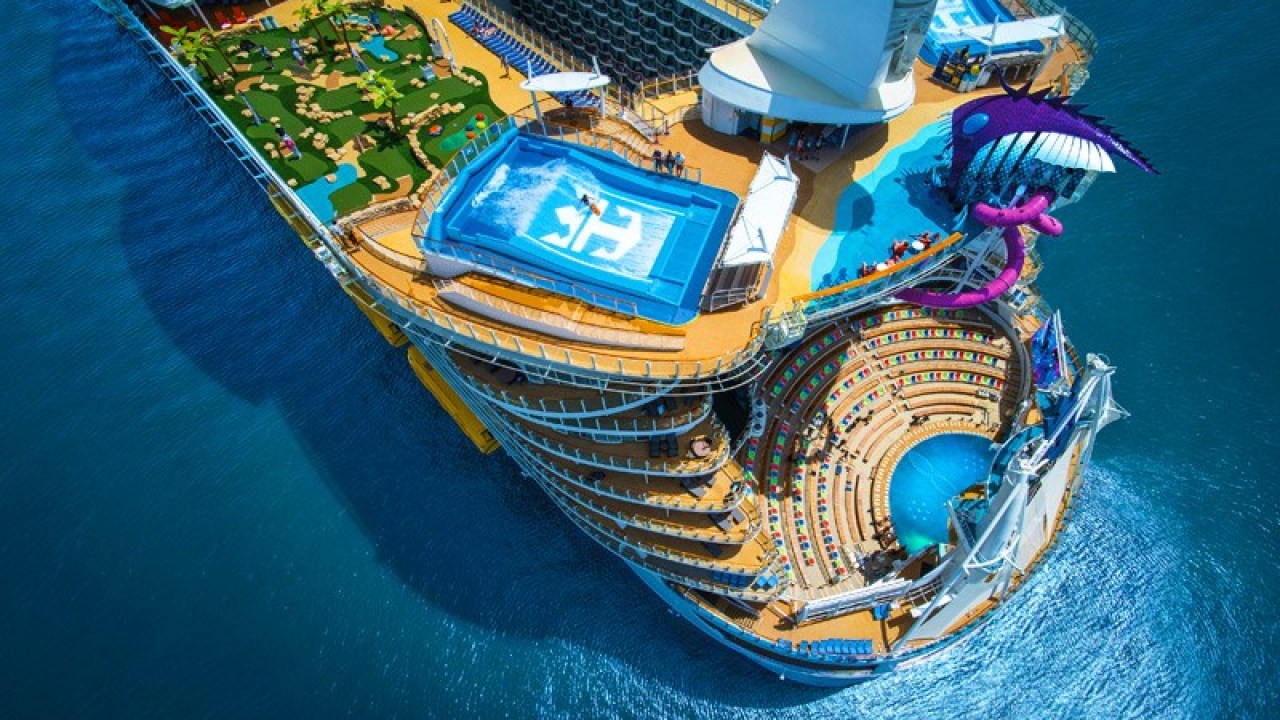 At 228,081 gross register tons, Royal Caribbean’s Symphony of the Seas is the largest cruise ship ever built.

ST. NAZAIRE, France — Eager for a look inside the largest cruise ship ever built? USA TODAY this week is getting early access to Royal Caribbean’s much-awaited, 228,081-ton Symphony of the Seas in advance of its maiden voyage, and we’re posting our first photos of the vessel in the carousel above and at our Twitter page and Facebook page.

As can be seen in the photos, Symphony boasts dozens of eateries, bars and showrooms as well as an array of deck-top amusements including a multi-deck water slide area, surfing pools and rock climbing walls.

Designed for vacationers who love big, bustling mega-resorts, Symphony is built on the same platform as Royal Caribbean’s giant Harmony of the Seas, the current size leader in the cruise world. But it eclipses its sibling by more than 1,000 tons and offers several new features.

Among differences, Symphony has more cabins than Harmony including a first-of-its-kind, two-deck-high family suite with a slide between floors. It also has a revamped Boardwalk amusement area, a new laser tag attraction and a new-for-Royal Caribbean seafood restaurant.

Symphony will sail with a crew of 2,200, meaning that on busy weeks it could be home to nearly 9,000 people.

Symphony has been under construction since early 2015 at the giant STX France shipyard in St. Nazaire, France — the same shipyard that built Harmony. Delivered to Royal Caribbean on Friday, the vessel currently is on its way to Barcelona, where its first voyage with passengers is scheduled for March 31.

WATCH:  Symphony takes to the water for the first time

Symphony will spend its first few months sailing in the Mediterranean out of Barcelona before moving to Miami to operate cruises to the Caribbean.

Symphony and Harmony are the latest, biggest vessels in Royal Caribbean’s Oasis Class series. Two other Oasis Class ships, Oasis of the Seas and Allure of the Seas, debuted in 2009 and 2010, respectively.

Royal Caribbean’s Oasis Class vessels have made waves in the cruise industry since they began debuting in 2009. All of the Oasis Class ships are in excess of 225,000 tons — more than 30% larger than the next largest cruise vessels.

Royal Caribbean has ordered a fifth Oasis Class vessel to debut in 2021.

With the addition of Symphony of the Seas, Royal Caribbean has 25 ships.

MORE:  Symphony of the Seas under construction